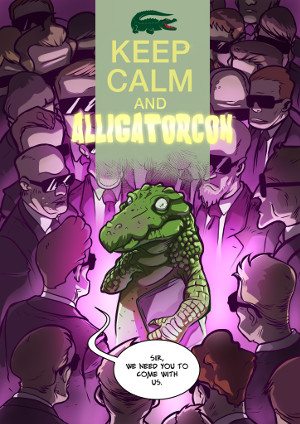 Sure, every con has T-shirts, but how many have POSTERS?.

[--- Rules of the Alligator
[--- Call For Participation
Send your proposal to: cfp@alligatorcon.pl

TL;DR just hack some shit and tell us how we can all do it too, for teh lulz. Now for the long version... WHAT WE WANT: The evaluation committee of AlligatorCon is interested in no-nonsense talks about hacking. We prefer technical talks but non-technical yet "unusual" ones are good too. Bonus points for presentations that include code, practical examples, and live demos. The usual topics include pentesting, exploitation, pwnage, 0days, phreaking, rootkits, radio, satellites, spreading knowledge, evading censorship, old sch00l shit, new sch00l shit, toppling dictatorships and bringing about the Revolution, all is good. Confidentiality is key, so don't hesitate to propose topics that "legit" conferences would never accept. You can check out the schedules for previous years to give you an idea of what's been presented before: 2017 - 2016 - 2015 WHAT WE DON'T WANT: If you were thinking of telling us all about your new company product that scans for cyberthreats in the cloud using the blockchain on the Dark Web... don't waste such a wonderful talk on us! Go straight to John McAffee, he'll give you some excellent business and life advice. HOW WE WANT IT: Our format is the following: one hour slots for everyone, but how much you use is completely optional. We recommend 40 minute talks, to give people time to drink a beer or mate, chat and relax before the next talk. For really quick topics (5-10 minutes) it's probably best to use the lightning talks slot, it's free-for-all -- just like a rap battle, you go up on stage and grab the mic.
[--- I am Jack's list of talks 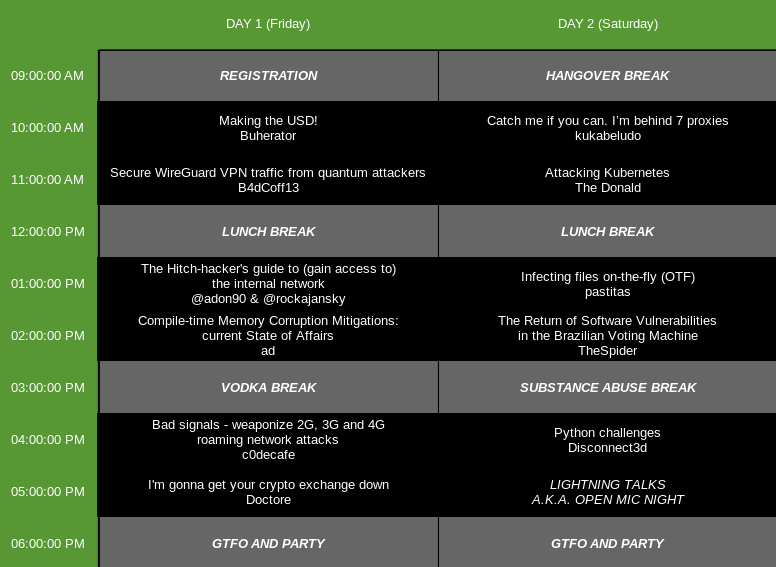 Hours of MS Paint went into this image. 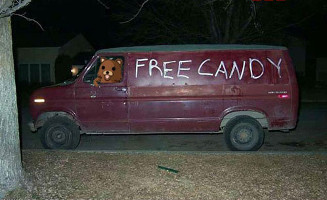 There are also the 208, 292 and 902 buses from the Kraków airport to the city center as well as a train to the main station, or you can alternatively fly to Warsaw or Katowice and go from there to Kraków by train (it's sometimes cheaper). But there's no free candy in those.
[--- We are the all singing, all dancing crap of the infosec world
The venerable Organizing Committee for this year will be:
[--- Sponsors
This event is proudly sponsored by: Soplica Vodka, Paper Street Soap Company, The George Soros Foundation, Russian Ministry of Fake News and Propaganda, Lifetime President of China Xi Jinping, His Majesty King T'Challa of Wakanda, and many others who prefer to remain anonymous but the NSA already knows who you are. No, seriously. They know everything. Run. Run for your lives. This year we will be missing the iconic old dude of Kazimierz, Mikołaj. May you roam the bars of Infinity now, old pal. 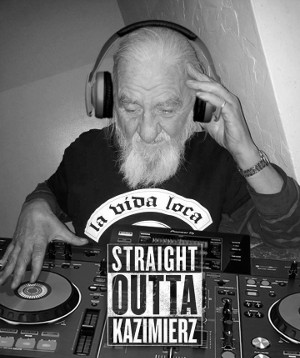